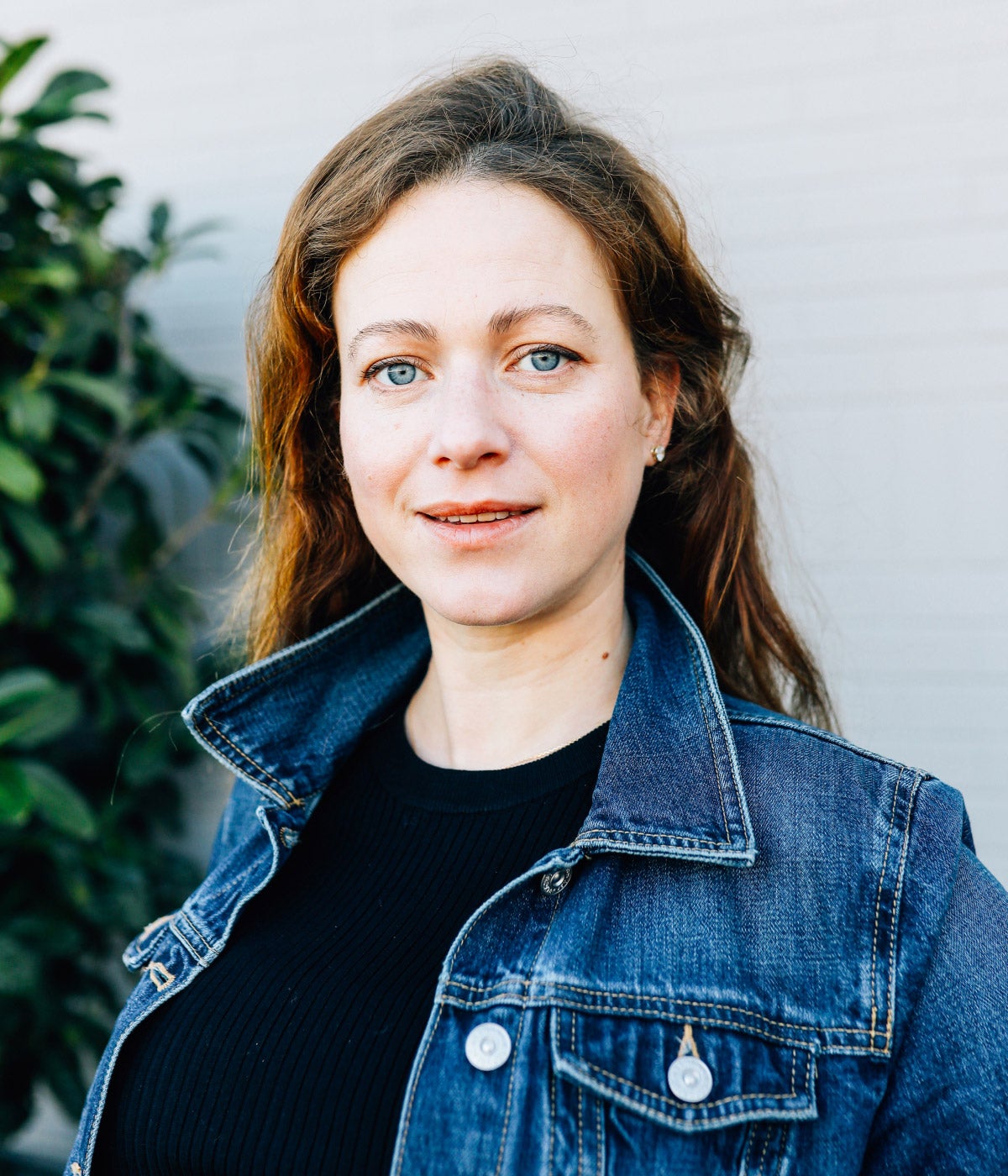 Armed with research, conviction and user empathy, Kath is determined to find answers.

Hi! My name is Kath. I’m from Alaska, and I’m a Senior Director of Product in San Francisco. For the past 10 years, I’ve taken all sorts of products from prototypes to launch day. Through my successes (and failures), I’ve developed a philosophy about how we make products shine. My process thrives on the delicate dance between data-driven design, business goals, and user feedback. Now I work at GitHub, and we build tools to help people build apps. Say hi .

I grew up north of Anchorage, Alaska in the 80s as one of five children. It was a rural area, but my dad was the head of network information at the Anchorage Daily News and we were one of the first on our block to get dial-up internet.

I quickly realized the internet offered a huge frontier of possibilities and spent every minute I could online. There were challenges everywhere, and I’ve always loved a good challenge. I had a Geocities, downloaded Celine Dion songs, played video games like Myst, experimented with HTML. It blew my mind that I could have a conversation with somebody in France. I even organized and digitized a thousand documents for my mom, who was a piano teacher. Sheet music, books, you name it—we called it “Kath’s Decimal System.”

In college, I was using a file transfer protocol (FTP) server to upload photos when the librarian tapped my shoulder. I thought I was in trouble for sure, and quickly told her I had rights to the photos. Turns out, she needed someone to redo the library website. So that was my first job. I didn’t know what information architecture (IA) even was, or that I could get paid to do it. But I had modeled the website after how the library was physically structured, and in a way that was user-friendly. It was my first toe dip into the water of IA work.

I quickly realized the internet offered a huge frontier of possibilities and spent every minute I could online.

From pastry chef to product manager

My early career path wasn’t linear. I left Alaska and spent some time in Tennessee as a pastry chef. Then I worked at a car dealership putting cars online because no one else knew how to manage the online inventory. I moved out to San Francisco in 2006 and I applied to be a front-end engineer for Google on a whim. I worked on the jobs page and it was tedious, but I liked it. We were trying to portray a very specific amount of details and I learned a lot about information and content design.

I loved Google, but after a year, I needed more of a challenge. Over lunch with my mentor at the time, I shared how I was limited to HTML tables. I was fresh out of college and wanted to do new, cool stuff! She knew exactly where to point me: Hot Studio. At the end of the interview, I fell down the stairs in front of an all-hands audience and gave myself a black eye. But I still got the job.

Over five years at Hot Studio, I was promoted from technical strategist to technical architect, managed to avoid falling down any more stairs, and learned how to liaise between designers and engineers. I enjoyed deciphering the nuts and bolts required to solve problems, and was evolving into a project manager.

My first official product management (PM) job was at SAY Media, an advertising platform (formerly known as VideoEgg), where I worked on mobile products. This kind of platform was still new so it was interesting, but I was mainly working with our creative agency and the ad server team. I wasn’t able to think about the nuances it takes to design, build, and launch a mobile application, and was missing that interaction with engineering.

I was really interested in how developers communicate with each other, which led me to take senior PM roles at DISQUS before I worked at Heroku managing the Heroku dashboard (I turned the Heroku CLI into a user experience on Heroku.com). Now I’m a senior director of product at GitHub and currently focusing on product documentation for developers across the globe.

I wasn’t able to think about the nuances it takes to design, build, and launch a mobile application, and was missing that interaction with engineering.

I’ve been the only woman at the table so many times. Early on, I was so proud to represent women. I didn't see anyone that looked like me, and that chilled my desire to learn. I guess, in a way, I was intimidated and felt like if there was no one that looked like me, maybe I didn't belong. I lost sight of what that meant and who I could learn from, because all I saw were men. I was always afraid of saying the wrong thing. So I got a chip on my shoulder about being the only woman at the table and built this wall of blame that held me back. It wasn't until much later that I learned how to own my convictions and speak up about my ideas.

But then I had this “aha” moment when I realized I was at the table, which caused me to think, “how can I help other women to get here?” Today there are a lot more women around me, especially at GitHub. My product leadership team is almost entirely women and people with diverse backgrounds and experiences, which gives me a better perspective on everything. I value their opinions and feedback so much.

As I see more women join me at the table, I know it’s my responsibility to engage with them. I don’t want the women on my teams to ever feel like they don’t belong, or to be afraid to share their opinions or ideas. I talk with them, listen to them, and help them use their voices. It means I’m not the only woman at the table anymore. Together, we’re a backbone for others who may be underrepresented and who also want a seat at the table.

As I see more women join me at the table, I know it’s my responsibility to engage with them.

Prioritizing the user and clearing roadblocks

I am way more effective as a product manager if I’m curious about the user more than anything else, so I’m always bringing the user into the conversation. That’s going to push me to talk to them and implement the data. At the end of the day, my job is to ship something, and if I’ve never talked to the user about it, I’m probably going to miss the mark.

It’s important to define the problem, but to also get really curious about how to get it done. A lot of the time, when you run into a roadblock or obstacle, you’re immediately discouraged and move away from it. But it’s my job to find a solution: to clean up the mess or clear the roadblock. To keep holding the user front and center and move forward.

When I find the answer to a question, it means I can move on—and I also have this great piece of information about how to do my job better. That’s what we’re after. If I can make it easier for developers to do that because they’re coming through the documentation to learn about GitHub or a certain product for the first time, that’s powerful. I can make it easier for them to onboard and unlock a whole bunch of other tools for them, which means they’ll use them more.

When a user is grateful and shares how much they like a product, that motivates me. Just hearing that the work I’m doing affects somebody’s life is really powerful.

It’s my job to find a solution: to clean up the mess or clear the roadblock. To keep holding the user front and center and move forward.

Seeking out challenges and finding focus

I’m a marathon runner. I’ve done 10 of them so far, and don’t plan to stop anytime soon. I’m learning how to play Chopin’s Etudes after not having played the piano for 15 years. There’s definitely a theme throughout my life and career to find challenges. I keep putting myself into situations that are hard to get through. I think I’m addicted to them.

One of my recent challenges was to stop drinking, which really helped me find clarity. There’s a huge drinking culture in tech. I’ve even been to interviews where alcohol was involved. This culture is normalized, but it’s not necessarily healthy for everyone in tech. It’s important to celebrate our accomplishments in ways that don’t include alcohol. Drinking was not serving me personally or professionally, and removing it from my life is one of the things I’m most proud of over the last 10 years. I attribute a lot of my recent success and focus to that.

One of the things I’ve been working really hard on is finding more confidence in myself to do things. That comes with conviction. A couple years back, I put together this product proposal at GitHub, but didn’t spend enough time gathering the data and understanding the user. I was just so excited about my own ideas, and ultimately, it didn’t pan out.

My next proposal was to take GitHub’s documentation to a new place. I knew we should invest in going from a static site to interface for code. This time, I spent a lot more time understanding the user, validating my ideas, and thinking about the team that would build it out. My boss recognized the thought I had put into it, and I ended up leading our product documentation efforts. Because of the conviction I had this time around, this has ended up being some of the most fulfilling work I’ve done my entire career.

These experiences made me realize that the more I can lean into personal conviction, the better I get at leading. I also try to instill that in my team. If you come to the table with enough evidence and enough confidence, you’re going to be able to do what you want. But you have to convince yourself first.

The connections behind the contributions

A leap of faith: Committing to open source